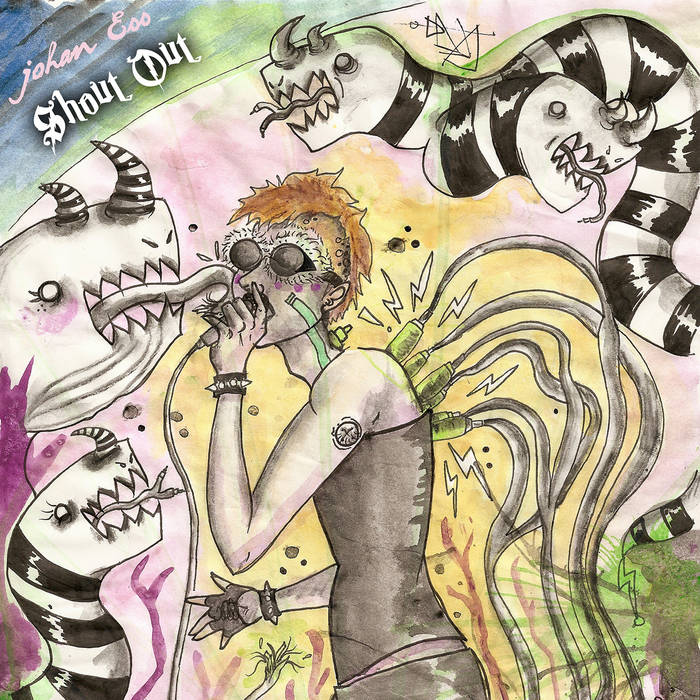 Exactly one year after the release of nightmare album Vltrahex comes a free new full-length release by the Prince Of Weirdness, Johan Ess. Shout Out is a gritty beat-laden tribute to some of their biggest influences, such as David Bowie, Frank Zappa, and Skinny Puppy. With some of these covers being recorded years ago, there are also a number of recent tracks on this release such as remixes of The Tleilaxu Music Machine and Otto Von Schirach!

Much gratitude and shout-out to all the people that I covered and remixed!

An experimental electronic musical performance artist based in the Pacific Northwest that incorporates subversive themes with dope beats.

Oh no, not me
I never lost control
You're face to face
with the man who sold the world

Who knows? not me
We never lost control
You're face to face
with the man who sold the world
Track Name: This Corrosion
Gimme the Ring
kissed and toll'd
Gimme something that I missed (Gimme the ring)

And do you hear at all?

I got nothing to say I ain't said before
I bled all I can, I won't bleed no more

Mr. America try to hide the emptiness that's you inside
But once you find that the way you lied
And all the corny tricks you tried
Will not forestall the rising tide of hungry freaks, daddy!

They wont go for no more great mid-western hardware store
Philosophy that turns away from those who aren't afraid to say
what's on their minds, the left behinds
of the Great Society

I AM AHHHHHHH
YOU ARE OHHHHHHH

SHED A TEAR BUT PLEASE DONT CRY FOR ME

I AM AHHHHHHH
YOU ARE OHHHHHHH

I'M SORRY! I ONLY WANTED TO TOUCH YOU

logix conclusion
self-blinded wretch
prepare your soul
for the tortures of flesh!

"people like you are just so much devil fodder"
Track Name: Silver Bells
City sidewalks, busy sidewalks
Dressed in holiday style
In the air
There's a feeling
of Christmas

Silver bells, silver bells
It's Christmas time in the city
Ring-a-ling, hear them sing
Soon it will be Christmas day

Silver bells, silver bells
It's Christmas time in the city
Ring-a-ling, hear them sing
Soon it will be Christmas day
Track Name: Perfect World (SpaceLounge7000 Version)
Fascist men
Living in a perfect world
You cannot taste the sarcasm
It's a good time to pretend

I am more than just
a little bit excited
Can you not see my face melting?
Turning into something else?

Set the date, stand in line
Make your protest, tap the line
and if it doesnt work for you
burning the building works just fine

Basking in your holy glow
Always probing your deepest thoughts
When is the last time we went out?
I dont know what i'm talking about

Would you like to hear a synthetic pretty sound?

Tasty gems from around the world, plus interviews with Kaitlyn Aurelia Smith and Nick Hakim.